Throwback Thursday from NOBODY'S ANGEL--How would you react to the paranormal?

How would you react if something paranormal crashed unexpectedly into your everyday world?  That’s the question I dealt with during a scene in NOBODY’S ANGEL, when the heroine is confronted with the impossible.  Kendall's reaction mirrors her personality.  What would your reaction be?

“…the date for memorial services for David Beamer, San Francisco’s favorite news anchor, has yet to be determined, as the police investigation into this incident is ongoing. . . Co-anchor Jane Walters was taken to St. Francis Hospital—”


“Excuse me, would you mind turning that down, please?” Kendall met the cabbie’s eyes in the rearview mirror. “I’m sorry, I have a terrible headache.”


The volume decreased to where Kendall could block out the words, but she wasn’t nearly as successful at blocking out the memories. Every time she closed her eyes, she saw the gruesome scene flashing before her. The screaming, the blood, the madness.


If it were possible, she’d never close her eyes again.


That, of course, made for a sleepless night. With nothing better to do, she decided to pick up her car left at the station. Who cared that it was two in the morning? If she was going to go for the sans-sleeping way of life, nocturnal errand running was something she might as well get used to.


At least the rubberneckers had left, Kendall noticed as she paid the cabbie and made her way to her trusty hybrid still in KPOW’s parking lot. It was a mystery why they’d shown up in the first place. The horror show they’d wanted to see had already played itself out on live television. Heaven only knew what else they’d been expecting to happen.


The hell of it was, none of it made sense. Kendall’s mouth flattened as she found herself turning her car toward St. Francis instead of home. Dave’s behavior hadn’t given any hint that he was about to go postal in front of a half-million shocked viewers. He’d been fine, reading her copy, and she’d been listening to every word. Her words, her story that she’d dug up a mere hour before they’d gone on air, with a gut feeling that this was an important story churning away inside her. Everything had been going beautifully, with Dave reading about the two murder-suicides like the professional he was. Then, in a blink of an eye, he began screaming as he turned into Freddy Krueger.


Not exactly how she’d imagined launching her first lead story.


There was a veritable forest of satellite antennas stabbing up from a fleet of news trucks around St. Francis Hospital, including a couple from her own station. Eager to avoid anyone she knew, Kendall drove to the back and parked beside an empty ambulance bay, only to freeze at the sound of a voice just as she shut the car door.


Guiltily she started and looked around. Under a porte-cochère and illuminated by harsh sodium lights, she spotted a gray-haired, scrub-clad man leaning against a wall by the automatic sliding glass doors. Clearly on a cigarette break, he looked at her as though she were something that had crawled out of a sewer.


She waved a vague hand toward the front. “I’m trying to avoid the news crews. Is there somewhere I can get in without being seen?”


“No, I…” She shrugged a little helplessly. “I write copy for KPOW TV News. I was the one who tackled Dave Beamer.”


“Oh yeah. Thought you looked familiar. Your wrestling match with that anchor guy is all over TV.” The man flicked his cigarette away and wandered toward her, a bluish-white haze of smoke swirling around him. “You here to get a scoop, or are you injured from tackling a crazy-ass guy twice your size?”


“Then what are you doing here?”


Good question. “I want to know why my friend is dead. Whether it was a dose of bad drugs, or a brain aneurysm, or a hitherto-unknown funky allergic reaction to shellfish, I want to know why. Whatever the answer is, I’m not going to be able to rest until I find it.”


“The only answer I can give you is that you’re not allowed to park here. We’ve got emergency vehicles coming in and out of…” The man stopped and craned his neck far to the left, as if he had a bad crick in it.


There was no warning. A muffled grunt escaped him as he lunged at her, hands outstretched. And his eyes…


His eyes were white.


A scream ripped from her already-abused throat, only to be abruptly choked off as his powerful fingers closed around her neck like a living vise.


Her sneakered feet left the concrete with the force of the impact. If her airway had been open, the breath would have been knocked out of her as she landed flat on her back, with the man landing hard on top of her. The back of her head smacked the pavement hard enough for her to see stars shoot across a darkening expanse. By the time her vision cleared, her assailant was looking down at her with a contorted face, his eyes milky white.


Wildly Kendall clawed at the fingers squeezing her neck so hard she felt bone grind against bone. An alarming buzz droned in her ears, while her eyes pulsed with the pressure of trapped blood, until that throbbing was all she knew and everything else faded…


Another violent impact rocked her, and it took her a few dazed moments to grasp that she wasn’t the one who had suffered the hit. Gagging, wheezing, not sure if her throat could even function after being so viciously abused, she sucked in precious gulps of air until the world came back into focus. She rolled to a wobbling sitting position, driven by the instinctive need to find her feet and run. But what she saw made her freeze in dumbstruck amazement.


The figure looming over her attacker was shrouded in black. It was as though the harsh artificial light itself couldn’t penetrate the darkness surrounding the masculine outline dressed in what looked like a long fitted coat straight out of The Matrix. His head was also covered in darkness, complete with a black, Zorro-like cloth that covered not just his head, but the upper half of his face as well.


The sight of a masked man was certainly more than enough to stop anyone dead in their tracks, but then the seemingly empty black sockets behind the mask’s eyeholes shimmered. Then they glowed. Then they burned with the ethereal whiteness of pure light, and his hands…


His hands were on fire.


Only it wasn’t like any fire she’d ever seen. It was a rolling, vaporous flame that matched the white flare of his eyes. The sight of it, along with his whitely lit eye sockets, was enough to lock the breath up in her abused throat.


Her attacker swiveled his head around so hard Kendall heard the man’s neck pop before he swung at the man in black, and she had to blink at how his movements smudged together. The newcomer jumped back, only to unleash a crescent kick the moment he landed, and again her eyes couldn’t quite see the movement in the stark sodium lighting.


It wasn’t the lighting. And it wasn’t the whack she took on the head, or being choked half to death. Though she knew it was impossible—like everything else she’d seen tonight—the movements of the two combatants were so fast they were blurring before her eyes.


The kick tagged her attacker, who spun with it and took a swipe at her savior’s middle even as an ominous snap of something in the hospital worker’s body rang out. With one of those too-fast-to-see-it moves, her savior evaded, spinning low and into her attacker’s body. Before she could fully register the move, he brought one of his glowing hands up to the aggressor’s chest, while the light where his eyes should be intensified until it was like looking into the sun.


“You’ve done enough damage for one night.” The masked man’s voice rolled forth like a cold wind across a barren plain; harsh, unforgiving. Inhuman. So terribly inhuman it made her want to curl up in a tight ball and never come out again. “I’m ripping you out of there once and for all, you unclean bitch.”


Before her disbelieving eyes, the vaporous white flame encasing his hand flowed into the man’s chest. The attacker’s white eyes bulged as though overfilled with the flame, his mouth opening on a soundless scream before he collapsed as if someone had suddenly pulled his power cord. A blue-white haze—the same haze she’d thought was a cloud of smoke—erupted from him and zipped off into the night.
*** 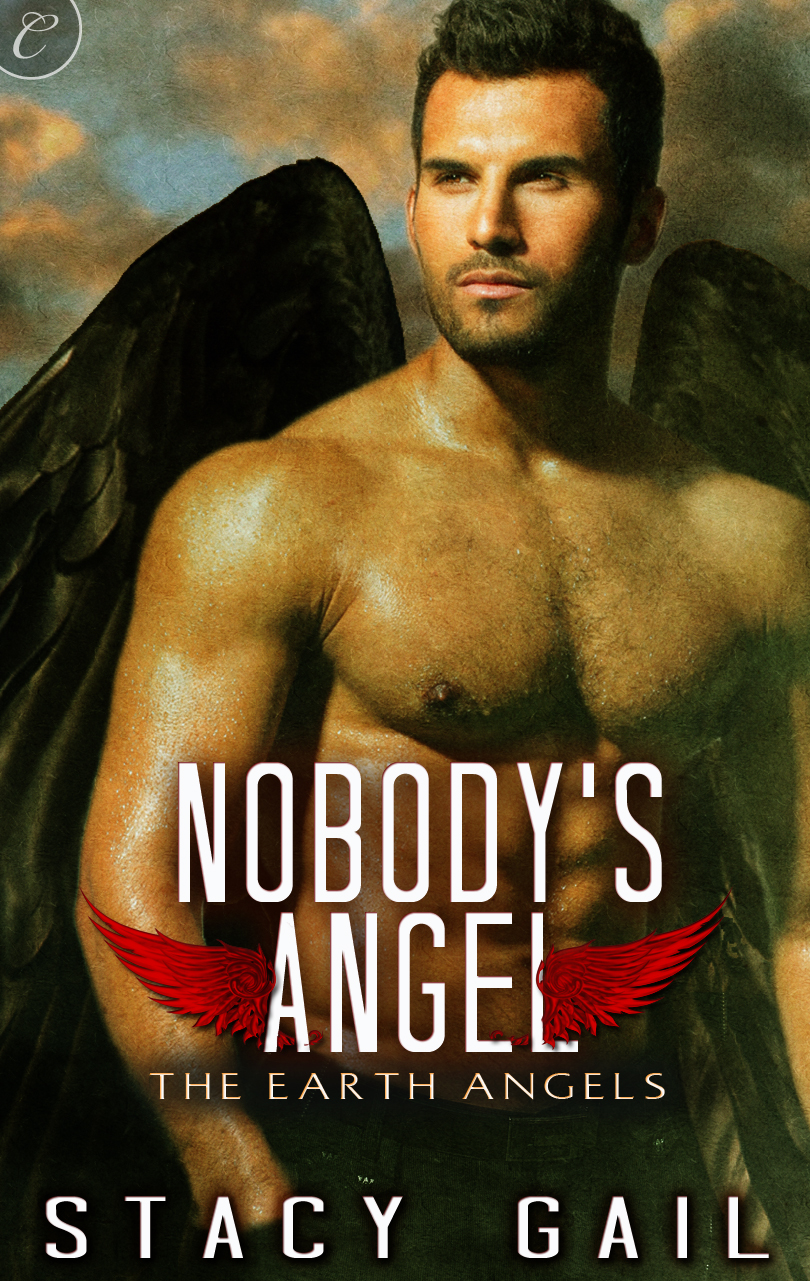