Over the past 18 months or so since I entered the publishing world, I've been lucky enough to meet some amazing writers.  Taryn Kincaid is one of them.  She's got a hot new installment in her 1Night Stand paranormal series by the name of FROST, and it all takes place in a Sleepy Hollow any woman with a pulse would kill to explore. If you like paranormal as much as I do, do yourself a favor and pick up FROST, THUNDER and LIGHTNING today :D


In FROST, my latest 1Night Stand release from Decadent Publishing, the heroine, sexy succubus Dagney Night, has a thing for Ice Wine, a sweet desert wine, made from grapes that are frosted on the vine. Not exactly a macho drink for a fire-breathing hero like Max Raines, a fire-sex demon.  On the other hand, he’d do just about anything to prevent turning Dagney to ashes when he touches her.


If your sweetie is not quite getting your hints,  try firing him up with these two  Fire & Ice cocktails, positively made for Valentine’s Day.


Maxwell Raines, a fire-sex demon, lives a life of solitude and seclusion behind the walls of his compound at Sleepy Hollow, channeling his lustful impulses into his art—until his muse deserts him and his temperature rises past the danger point. He needs sex. Now.


When Madame Evangeline arranges a torrid Valentine’s 1Night Stand for them, will the flames of their encounter be too hot to handle?


Dagney followed her sister’s glance, and her heart flipped like a gymnast unable to nail a vault. Darkness swathed the gallery with the exception of the lights above or below each of the paintings. The large man emerging from the shadows held her rapt. Waves of pure, unadulterated lust smacked her with such force she didn’t even see Lily and Campbell leave. The blast of raw desire crumpled her to the floor. Her gaze remained riveted on the tall hunk of ferocious male stalking toward her, radiating undiluted carnality. He set something carefully on the floor and grasped her by the elbows, his touch surprisingly gentle when he lifted her to her feet.


Yeah. No kidding. Who else could a guy so hot, so studly, possibly be?


She told herself not to swoon. Ordered herself not to swoon. But, Goddess, that rumbling voice. More potent than a train barreling over the tracks. And he smelled so good. Sinfully masculine. A bit of musk, a bite of pine, an essence of dark, smoky nights. Sexy scents. Reminiscent of tangled satin sheets that had been given a good work-out.


Her legs turned to rubber, and she doubted they’d support her on their own. She’d be mortified if he’d have to scrape her puddled body up again. But he hadn’t yet relaxed his grip. Could she bullshit her way through the meeting without collapsing? “You’re late,” she said.


“Well, the party’s over, Mr. Raines.” She waved a hand around the empty room.


“Depends on your perspective.”


“You’re big on perspective, are you?”


Taryn Kincaid lives in beautiful Bora Bora. Or wishes she did. When she's not parasailing up and down the Hudson River, taking care of her aging pet walrus, or volunteering at the local animal shelter [oh, HELL, no], she loves to arrange her voodoo doll-pin collection and practice chanting. Taryn is dedicated to eradicating the Kardashians and Honey Boo-Book from the face of the earth, along with The Bieb and sparkly vampires. At this moment, she is busy adjusting the tin foil to throw the CIA (Culinary Institute of America) off her trail. She hangs around a lot on Facebook and Twitter with her trillions of fans and pops in at Goodreads from time to time. You can catch her on her website, http://tarynkincaid.com, and her blog, http://dreamvoyagers.blogspot.com where she lives for comments!  Website | Twitter | Facebook | Goodreads | Amazon
*** 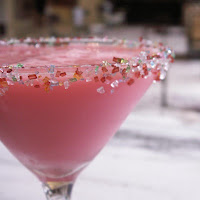 Want to enter Taryn's Valentine's Day swag giveaway? (You should--she mentioned CHOCOLATE!!!)  Just leave your favorite drink recipe in the Comments below along with your email addy--it's that easy!
Posted by Stacy Gail at 2:01 AM