Book 2 of The Earth Angels, SAVAGE ANGEL, is out today from Carina Press!  Only two weeks ago the beginning of The Earth Angels series was kicked off with NOBODY’S ANGEL, a tale of a true superhero complete with a mask, secret fortress, an evil villain and a woman strong enough keep up with his every move.  With super-powered beings, there just HAD to be a superhero in the mix.  But as I was outlining this entire series, I thought there also had to be…

Sara Savitch is the descendant of the Seraphim, heaven’s soldiers with wings of fire and also known as the Burning Ones. As a bodyguard and head of her family’s private security company, she’s as deadly as they come.  But when it comes to the personal, one-on-one socialization—or God forbid, interacting with a man on a feminine level—she’s more hopeless than I was when I tried to speak French while in Paris (it wasn’t pretty, trust me on this).  Dr. Gideon Mandeville is the man who’s got the prescription to cure what ails her, but he does have a tendency to make her angry.  And like the Hulk, you wouldn’t like Sara when she’s angry… 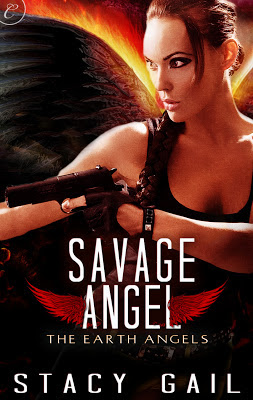 Excerpt:
The fury was so great, so massive, she couldn’t breathe properly. It was almost alive, this vast and immeasurable rage, a surging rush of heat from a volcanic place so deep inside, she never knew it existed. And with it came the jagged well of pain, a cancerous thing that had no name as it infected every hidden place inside her. The kindness she’d shown Noah during his recovery had been for Gideon’s sake, and this sordid innuendo was the thanks she got? She’d treasured the stolen moments of mind-melting pleasure with Gideon, kept the memory of them so close to her heart that she’d told no one about it. But there was nothing left for her to treasure now, not even the remembered pleasure of being in his arms. How could there be, she thought as her vision blurred into a dangerous heat-waving red, when he’d turned out to be an absolute bastard?
The bastard in question pulled at his collar as if he, too, felt hot. “As long as I’ve made myself understood—”
“Get out, or die where you stand.” Sara kept her eyes lowered. Not out of defeat, but out of genuine fear of what she might do. The fire inside her was dangerously close to the surface, and she had to grip the cool edge of her glass desk to keep herself in place.
Feel nothing. Damn it, don’t feel anything!
Oh God, the desire to fry him where he stood was terrifying.
She heard him move. “I won’t bother you again.”
Thank heaven. When she heard the closing click of the door, she looked to the potted decorative bamboo on the edge of her desk, bright green and thriving. A second later the leaves browned and curled in on themselves while the stalks withered. The next second, it exploded into bright, yellow-white flames. On automatic pilot, she let go of the desk’s edge and knocked the small fireball onto the fireproof stone flooring before it could damage any neighboring electronic hardware. Then with an economy of motion she dragged an ever-present fire extinguisher out from a cabinet, dousing the flames before the overhead sprinkler system could go off and let everyone know she’d had a spectacular loss of emotional control.
Feel nothing. Feel nothing. Feel nothing, damn it.
Exhausted, Sara set the extinguisher aside before falling into her chair, shaking with the stress of getting her emotions under control while the stench of charred plant life poisoned the air. And not for the life of her would she look at her desk and the melted glass where her hands had gripped.
***
SAVAGE ANGEL dives into the deep end of the story arc encompassing the entirety of The Earth Angels series.  From this point on, things are about as serious as a heart attack in the world of the 2st-century Nephilim, and it's going to take everything they've got to pull out a win.  And, because SAVAGE ANGEL ignites such an intense storyline, I chose to set aside every other project in the latter part of 2012 so that I could complete the series.  Why?  Because I'm a reader, just as well as a writer.  And if there's one thing that makes me want to scream (albeit in a good way...'cause sometimes a good primal scream feels freaking AWESOME) is a cliffhanger at the end of a book.  There's no way I'd leave any reader hanging for long. ;)
Question: Are you okay with cliffhangers in books?  What literary cliffhanger worked you into a lather to find out what happened next?
﻿BUY LINKS for SAVAGE ANGEL:
Carina Press | Amazon | Barnes & Noble | Kobo | Google Play | ARe | Bookstrand | ebooks. com | Audible
Curious about SAVAGE ANGEL, or want to take a sneak peek at the upcoming Earth Angels books?  Please feel free to look through my storyboards on Pinterest﻿.
Posted by Stacy Gail at 8:28 AM