Holy crap, I leave for RT Con next Tuesday! I have a feeling that even if I had another month to prepare I still wouldn't be ready, so now I'm just sort of... resigned. :P  It'll be what it will be, and I'm determined to have fun in the process.  Wheee! 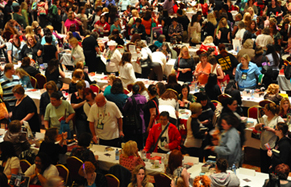 What workshops will I be doing?  For the most part, I'm going to be learning about the New Adult genre, the latest how-to process for self-publishing and getting schooled on new ways to promote and brand.  In fact, I've signed up for so many workshops I'll probably be sick of the world of writing by the time I get home. :D  I hope not, though, because I just heard from my editor that I should be expecting developmental edits for DANGEROUS ANGEL. Yay! :D


From my much-adored and brilliant editor, Andrea:

"I got an updated pub schedule from Carina the other day, and it looks like Dangerous Angel is going to be released March 31, 2014. I am very close to having the DE ready for you". 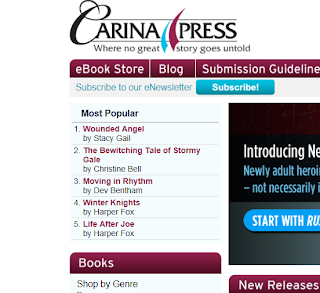 So there you have it -- a release date for the 4th and FINAL BOOK in The Earth Angels series! *trumpets blare*  Another bit of wonderful news -- the 3rd book in the series, WOUNDED ANGEL, is now up for pre-order on Carina Press's site. (And for reviewers interested in getting their hands on it now, find it on NetGalley, or contact me for an ARC.  I love to share! ^_^)  I didn't even know about it until someone pointed out that it was in the top position on CP's Best-Seller list on April 21st.  Don't ask me how long it's been on the website ready for pre-order; to be honest, I've been working so much on my other job that the writing facet of life has, understandably, had to take a step back.


Which leads me to throwing out a HUGE congrats to my skaters on getting through Adult Nationals without losing their minds. *throws confetti* They did exactly what they set out to do -- achieving personal bests and hitting the podium (and the ice more than a few times, but thankfully that was left for the practice ice *whew*).  Next year Adult Nationals will be in Cape Cod, so I'm already pushing more of my over-21 students to go for their tests and level up to qualify for this annual event.  I want to eat lobster and go whale-watching! :D 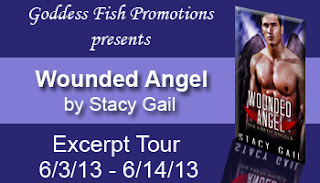 I'm also getting my younger skaters ready for a big competition this weekend in Dallas (everyone's having to re-route around West, Texas, due to the fertilizer plant explosion aftermath), while all this writer-stuff madness is going on.  Thankfully I can lean on GoddessFish Promotions to help me with WOUNDED ANGEL's upcoming release.  I'm doing an Excerpt-Only tour with them, and to give you a taste of what to expect from this, it's time for an Ella/Nate scene from WOUNDED ANGEL, releasing May 27th. Enjoy!

The acid burn of humiliation stung her face with white-hot pinpricks, and she jerked to her feet so he couldn’t see the crimson glow of it. But by the time she’d crossed into the living area of the suite, the agony of that humiliation melded with a razor-edged anger that cut at her until she was a bloody mess. After a rejection like that, there was no way she could accept the idea of just meekly crawling into her cold and lonely bed without so much as a whimper in response. If he didn’t find her appealing, fine. His prerogative. But he sure as hell wasn’t going to get away with making her feel like an idiot for being attracted to him.
“Maybe you should put a damn shirt on if you’re uncomfortable with me noticing you in all your spectacular male glory. Trust me, there’s no need for you to look like such an outraged virgin—I wasn’t going to jump your bones. You might be some great eye candy, but I’m not into raping uninterested men.” And with that, she snapped off the light and stomped to the pale blob that was the pullout bed. Not exactly the stinging retort she’d been going for, but what the hell. It would do in a pinch.
No sooner had she plopped down on the side of the bed, a light flared in the other section of the suite.
“Oh no, you don’t. You don’t get to turn the lights out just when things are getting good.” Nate appeared, leaning against the partial wall separating the sleeping and living sections of the suite. Though it was just about the last thing she wanted to do, Ella glanced over her shoulder as he crossed his arms over that chest she ached to taste. She could have sworn the bastard had the gall to flex his pecs. “Eye candy?”
“Yeah. As in, all sugar and no substance.” There. Let him chew on that for a while.
He shrugged. The pecs danced again. “I’m cool with that. I like candy.”
“Good for you.” Still aflame with humiliation, embarrassment and a growing desire that wouldn’t shut up, Ella ignored the stifling bedclothes and instead lay down on top of the scratchy blanket with her back to him. “Good night.”
“What about that spectacular male glory you mentioned? I’m interested in hearing just how spectacular you think my male glory is.”
Oh, please. “Since you’ve made it abundantly clear the feeling isn’t mutual, you can speculate on that all by your lonesome and leave me the hell out of it. Now go to bed.”
“Bed, huh? Well, normally I’m not into pushy women, but for you I suppose I can make an exception.”
If she hadn’t been lying down already, she would have fallen over in shock when the rickety bed groaned in protest as he stretched out beside her. “What the hell are you—”
“Don’t blame me, you started this. I’d have to hand in my official Red-Blooded Guy membership card if I didn’t at least try to find a way to persuade you to finish it.”