Art - It's In The Eye Of The Beholder... Or Something Like That

A super fantabulous thing happened last week – I got to meet up with my favorite llama and dedicated nudist, cozy mystery writer Hart Johnson and show her my neck of the woods (otherwise known as a little place called Texas :P) 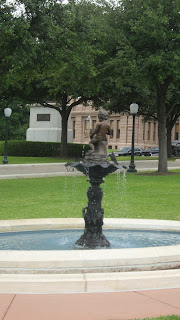 The first thing all visitors to Austin should see is the city’s version of Bourbon Street -- legendary 6th Street.  But since it was the middle of the week in the middle of the day, not too much was happening, so it was time for a minor change of plans.  We marched up to the State Capitol, where I noticed a lovely little fountain right out front.
That’s when my mood for art appreciation bloomed.
At juuuuust the right angle, this cherub-themed fountain looked like a baby boy, erm, relieving himself (and quite proudly, I might add *snort*).  So naturally I had to take a picture of it.  But little did I know that this was just the beginning of an art-appreciation filled day.
On our way back to Hart’s hotel, we passed the Austin Museum of Art – AmoA.  Come to find out, there was a special exhibit of local artists going on.  Some were FABULOUS – Hart especially liked the ash-embossed dead-body imprints depicting Mexican border violence taken directly from news photographs.  Other exhibits, though… well, I’m going to be honest.  I personally did not see the artistic value of a tarp on the floor.  Seriously y’all, there was a frickin’ TARP on the FLOOR.
﻿
﻿

Since we could hear construction work going on behind the scenes, we assumed that tarp was a part of it.  But it wasn’t.  Nor was a dust-covered piece of old insulation.  It was scrapped construction material which the artist said was a metaphor, designed to inspire a person to think about our throw-away society.
I took one look at it and was inspired to sneeze myself into a coma.

But it did get me thinking.  In both writing and in on-ice choreography, in my own way I’m also a creator of art.  Some people might look at my writing (or the unforgettable Moulin Rouge skating routine I put together complete with corsets, fishnets and for one skater, a riding crop), and think it’s smut.  The fact of the matter is, it really is in the eye of the beholder, and no amount of debate on whether or not a romantic work of fiction is “worthy” literary fiction is going to change some minds.  But I’m okay with that.  Ultimately, when it comes to the creation of art, the creator has to believe in their work.  And I do.
Posted by Stacy Gail at 7:58 PM