A Writer's Goals -- What Are They? 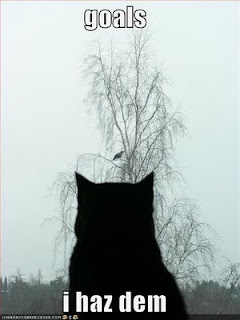 If you pose this question to a dozen writers, you’ll get a dozen different responses.  I do know one thing – if you don’t know what your own goals are, it’s kind of hard to achieve them.  So with that in mind, I recently made a list of what my personal writing goals are for the upcoming year. J
1. ESTABLISH MY TERRITORY
Too bad this isn’t the animal kingdom.  If it were, all I’d have to do is pee in a corner or two and that would be that.  We humans, though, are a bit more complicated (not to mention hygienic), so that means it's time to put on my big-girl pants and be aggressive in getting my name out there.  Name-recognition is an absolute MUST, according to just about every veteran in the publishing biz.  After lots of brainstorming on how to go about it, I've decided my way of attaining this glorious name-familiarity thingie is to…
2. BE PROLIFIC
So yay – I’ve gotten my foot in the door with a couple projects at fabulous Samhain Publishing.  But ultimately… big deal.  There are plenty of one-hit wonders in the world, but I’m determined not to be one of them.  Every day I review the business announcements from all the romance publishing houses on Twitter (how I love social media!).  When any of them have an open call for submissions, I’m on it like white on rice.  Example: I’ve just completed a 33K-word steampunk romance entitled TICK-TOCK GOES THE CLOCK (no Ke$ha jokes, plzkthnx), and will be sending it to Carina Press later this week, limbo-ing in under the May 15th deadline.  Who’s Carina Press?  They’re the fledgling digital-first division of Harlequin Books, the number-one selling publisher of romantic fiction. (At this point, I’d like to give a humongous THANK YOU to my beta reader Hart Johnson, aka the Watery Tart.  Thank you so much, Your Tartness, for putting another pair of eyes on TICK-TOCK.  I <3 you more than my ice skates ^_^).
I’m also getting ready to ship out a 60K contemporary romance by the name of MOST LIKELY (also to Carina Press), and it’s the first book in a loooong series I’ve been working on since forever.  When I finally get MOST LIKELY landed somewhere, life is going to be good, since there are so many other books in the series ready and waiting to follow in its footsteps.
Last on my plate (at least for the next couple of months) is a superhero-themed project for Samhain.  I have to admit, I’m nervous about attempting this one.  I’ve even considered not trying for it at all.  Why?  Well… remember when I said I keep a sharp eye out for any open calls for submissions?  When Samhain announced they were looking for novellas with a superhero theme for an anthology on Twitter, the site blew up with enthusiastic (and nationally best-selling O_o) authors who are going to go for it.  Only three submissions will make it into the superhero anthology, whereas everyone else… well, they will have had fun writing about men and women in masks and spandex.
In the end, I’ve decided I am going to go for it.  Not because I have a hope of making it (I’ll always hope, but I’m realistic about my chances), nor because I’m doing it for pride’s sake.  Like any writer who wants to be taken seriously, a huge part of my job is to get my name out there.  I need to prove I can produce a steady flow of high-quality product.  My goal is to make the name Stacy Gail familiar, so that when any editor reads my work for possible publication, they will be comfortable putting their faith in my abilities.  Which leads me to my last goal for the coming months…
3. NETWORK
This seems to be a bit of an obstacle for a lot of writers.  Maybe it’s because writing is such a solitary thing; maybe it’s because writers live so completely within their internal world, the real world (understandably) becomes less important.  I suspect I’m one of the lucky ones.  I have a great group of friends both IRL and online who keep me on top of my *cough*spazzy*cough* game.  I love meeting new people, talking to people, and sometimes (though I don't mean to) scaring people with my wow-she-should-be-medicated antics.  So I’m going to play to my strengths.  My goal for the coming year – meet as many people in the field of romantic fiction as possible!  I don’t care who they are – would-be authors, veteran editors, avid readers, savvy reviewers.  Anyone who has a passing interest in books is someone I’m ready to get to know.  After all, these are people who love the same thing I do; who wouldn’t want to meet with peeps like that?
Zig Ziglar once said a goal properly set is halfway reached.  The goals I’ve set for myself are totally doable, and each one supports the other.  Now that I’ve written them out, I’m hoping Zig was right. With any luck, I’m halfway there. J
Posted by Stacy Gail at 12:34 AM