Welcome! If You're Looking for Clues to The Romance Reviews Year End Splash, Read On!

Hey there!  The authors of A CLOCKWORK CHRISTMAS are proud to be a part of TRR's Year End Splash (YES!) Party.  Jenny Schwartz, PG Forte, JK Coi and I have some pretty obvious clues placed in our blurbs and excerpts, so if you're playing TRR's game, read on (and don't forget to enjoy the excerpts while you're at it, mkay? ;) ).  Good luck! 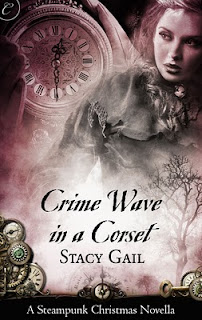 Roderick Coddington is on a mission to make Cornelia Peabody pay. After identifying her as the thief who stole a priceless Faberge egg from his dying sister, he finds her and shackles a deadly timepiece to her arm. If she doesn’t return the egg by Christmas morning, she will die.
Normally seven days is more than enough time for Cornelia to carry out the perfect crime, but Roderick’s intrusion into her life is beyond distracting. He challenges her mind, and ignites her body with desire she’s never felt before. But worst of all, he threatens the independence she values above all else…
As Roderick spends time with Cornelia, he realizes there’s a lonely soul hidden beneath her beautiful but criminal veneer. Falling for a thief wasn’t part of Roderick’s plan, but plans can change and he has no intention of letting another priceless treasure get away from him.

EXCERPT FROM CRIME WAVE IN A CORSET:
Her quick intake of breath was audible, but she couldn’t help it. In a night full of surprises, that was a lulu. “You want me to steal something for you?”
“Steal something back,” he stressed, his tone so cold it would have made the North Pole seem balmy. “An egg, to be precise. A very special, very rare egg. Now do you remember?”
Of course she did. It wasn’t every day she came across a magnificent Fabergé egg with a surprise of a solid gold cherub hidden inside. It had been so heart-stoppingly beautiful she had almost kept it for herself.
He made a sound of impatience. “No need to answer, I can see you do. Which means we’re making progress.” With brisk efficiency he did something with the clockwork, then turned to pull her back. “Now that you know what I want, you need to understand what will happen to you if I don’t have the egg back by midnight, Christmas morning.”
Before she could ask what he meant, a sickening odor of ozone and smoke billowed out along with a harsh electric buzzing that made her eardrums quiver in protest. Right before her horrified eyes, the dressmaker’s dummy shuddered and jived while sparks flew in every direction. It toppled over even as it burst into flame before the buzzing slowly growled to a sullen end. Roderick was there in an instant with a pail of water, dousing it with motions both unsurprised and repetitive, and in the part of her brain that still worked Cornelia now grasped why the dummy was so scorched. Before locking his timepiece on her wrist, the ever-meticulous Roderick Coddington had tested his electrocution device over and over, just to make sure it worked. Just to make sure it could kill.
Just to make sure it could kill her.
“So there you have it.” Roderick turned to her with a vicious simile of a smile while smoke hung about them in a poisonous haze. “Tick-tock goes the clock, Peabody. You have seven days to right a terrible wrong. Or barring that, seven days to live. Either way I’ll be satisfied.”
Posted by Stacy Gail at 3:47 PM

Email ThisBlogThis!Share to TwitterShare to FacebookShare to Pinterest
Labels: Clue, Crime Wave In A Corset, The Romance Reviews