One of the things I love about being part of an anthology is that you get to meet some really great writers who are involved in the same project.  This is how I met Sasha Summers, whose adventure-filled sci-fi romance novella, GALILEO’S HOLIDAY, will be a part of Carina Press’s sci-fi holiday anthology, A GALACTIC HOLIDAY, releasing December 3rd.  But in addition to all that excitement, she has another book coming out in December as well, and today we’re unveiling its fabulous cover!  Ladies and gents, feast your eyes on…A HOLLYWOOD HOLIDAY! 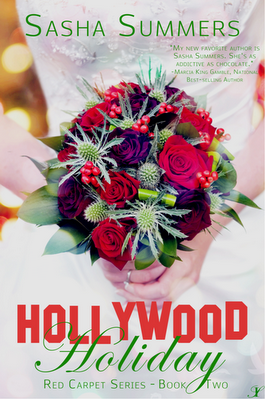 Isn’t it spectacular?  What’s more, I’ve also got the blurb to go along with it! (Woo, score!)


All she wants for Christmas is for Hollywood to love her again. But once she meets him, her Christmas list changes.


Jen’s only Christmas wish: Hollywood falling back in love with her. Meeting ex-Marine Gunner was a bonus. She likes that he isn’t impressed by celebrities or the movie biz. She likes that he’s funny and sweet … and drop-dead gorgeous. And she loves that he has no idea who her alter-ego is: Jen Fleming, Hollywood bad-girl and paparazzi target number one. Why ruin an amazing affair when he’s leaving after the new year?

But the closer they get, the harder she falls, and the more she wants to tell Gunner everything. Especially once he shares his secret with her.

Her new Christmas wish: Gunner accepts and loves her for who she really is.


Now that you’ve gotten to know a little bit about HOLLYWOOD HOLIDAY, it’s time to get to know the brains behind this beauty of a book.  Let’s play 20 Questions, shall we? (Except, erm, it’s only ten questions.  Twenty just seemed nosy. :P)


SG: Hollywood!  The very name sparks images of glamorous movie stars, beautiful wannabe-movie stars, and Rodeo Drive where Julia Roberts couldn’t go shopping.  Have you ever been there?


Sasha Summers: No, not in person. I do read a lot of tabloids and watch way too many entertainment shows though… I’d love to go. Someday… It’s on my list. J


SG: I think just about every kid on the planet dreamed of one day moving out to California to become a big movie star.  Did you?  If so, who was your personal Hollywood idol while growing up? Did you ever have a leading man in mind?


Sasha Summers: No way!!! I’m perfectly content to watch the big screen, but I have NO desire to be on it! Honestly, I was (and still am) a huge Meryl Streep fan. She’s amazing. And for my leading man… well, I did have a rather massive crush on Mel Gibson when I was younger. Now he’s kind of scary but he was ‘it’ in his Year of Living Dangerously, the Bounty, and Mad Max days. Yum!


SG: This past July you released the first book in your “Hollywood” series, HOLLYWOOD EVER AFTER.  Will we see Claire and Josh again?


SG: When you’re deciding what to wear for the day, do you decide to glam it up like a super-chic Hollywood socialite, or are you like me and pray that no one will notice the sweatpants you’re wearing look slept in for a reason?


Sasha Summers: Hm… there are days when I forget to put on a bra until it’s time to pick up my kids from school. I am SO glamorous. Not! I wish I could be super-chic. But that’s not me. I’m the anti-chic *giggle*


SG: You have two book releases this December that are holiday-themed.  When you think of the holidays, what do they mean to you?


Sasha Summers: Family time… baking, decorating, A Christmas Story, and lots of cuddling. I love Christmas. Elf is one of my favorite movies – I think I was a Christmas elf in a past life.


SG: What was the weirdest Christmas gift you’ve ever received? (Don’t say socks.  Everyone gets socks, so that means a gift of socks isn’t weird.  It's just sad.)


Sasha Summers: Huh, I don’t think I’ve received a weird present. Does a 50lb. bag of corn count? I guess that would work.


SG: I know you just got some squee-worthy news on your latest projects.  Would you like to share this amazingly busy publishing schedule?  Are any of these projects part of your “Hollywood” series?


Sasha Summers: Yes! I am crazed. Sleep will be optional for the next… oh, 8 months or so… Book 3 of the Red Carpet Series (Hollywood Homecoming) will be out in June 2013. And The New Girl, my first Young Adult novel, will be out in November of 2013.  Oh, oh, and For the Love of Hades (Book 2 in the Loves of Olympus Series) kicks off 2013 with a January release… J


SG:  If there is ONE THING you’d like to share with the world about HOLLY WOOD HOLIDAY, what would that be?


Sasha Summers:  I’d like to think that the Hollywood books combine the familiar (love, family, struggles) with a taste of celebrity and movie fun.  It’s a very fun world to visit and stay—hence, the sequels. J


SG: Have we figured out what the heck we’re getting for our editor yet for Christmas?  I can’t remember… *blank stare*


Sasha Summers: Well… since I’ve never received anything really weird, I think we should get each other something completely hilarious and bizarre! Thoughts? (ßI got nothin’. :P)


There you have it! And, since HOLLYWOOD HOLIDAY is a sequel, I asked Sasha if we could have a glimpse of the book that kicked off all this glam goodness.  Not only did she offer up the blurb and cover art, she’s doing a giveaway for an autographed copy of HOLLYWOOD EVER AFTER, as well as a holiday ornament!  Good luck to those participating in the giveaway, and to Sasha--congrats on HOLLYWOOD HOLIDAY'S outstanding cover reveal! *throws confetti*
GIVEAWAY SWAG GIFT:
﻿ 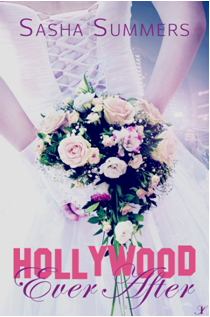 Happy Endings are for fairy tales. Or the movies. Not for real life. At least, not in Claire’s life. Even though she’s starting over, she knows better than to want too much this time. But when she falls, literally, into the strong arms of Hollywood’s ‘it’ boy Josh Wiley, Claire’s in for some surprises. Her plans for rest and relaxation are forgotten as one incredible night with Josh becomes two… And her heart begins to want him as much as her body. Will two kids, one bastard ex-husband, and Josh’s juggernaut career mean the end of their affair? Or can Claire find her happy ending after all? 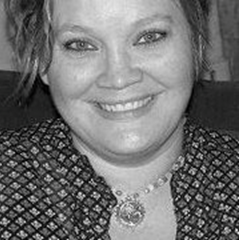 Sasha is part gypsy. Her passions have always been storytelling, Hollywood, history, and travel. It’s no surprise that her books include a little of each. Her first play, ‘Greek Gods and Goddesses’ was written for her Girl Scout troupe. She’s been writing ever since. She loves getting lost in the worlds and characters she creates; even if she frequently forgets to run the dishwasher or wash socks when she’s doing so. Luckily, her four brilliant children and hero-inspiring hubby are super understanding and supportive.