Hello? Is This Thing On? Give A Listen to A GALACTIC HOLIDAY! Plus, One Last (HOT!) Excerpt 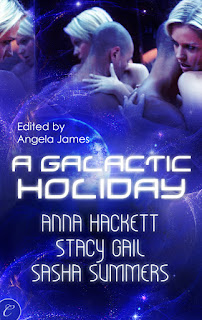 Can you believe a mere two weeks ago I was learning that Audible had decided to pick up A GALACTIC HOLIDAY?  How well I remember it…I showed the world I was a bad email reader AND I don’t know how to count.  Good times.

Here we are, fourteen days later, and lo and behold, Audible has already gotten A GALACTIC HOLIDAY up for pre-order on their website! (ßSee?  I wouldn’t lie to you :D)

I’m so excited to once again have a project with Audible.  Last year was my first encounter with audio books.  The steampunk holiday anthology of which I was a part, A CLOCKWORK CHRISTMAS, had been chosen to become an audio book, and I couldn’t wait to hear my novella read aloud in someone else’s voice (FYI, I do aloud read-throughs of all my works before I send them off to my editors).
It’s pretty freaky to hear your own words read back to you, with inflections and accents that are slightly different than what your inner voices have been whispering for months.  I really lucked out with my voice actress; Karen White was the talented lady who did my steampunk Christmas novella, CRIME WAVE IN A CORSET, and she nailed Cornelia Peabody's Irish accent to a T.  Thankfully Karen had an Irish grandmother, so all she had to do is think of her, and Cornelia's accent flowed forth like magic.  Thank you, Karen!

There’s a totally different accent and feel found in my latest holiday novella, the uber-urban sci-fi holiday novella, HOW THE GLITCH SAVED CHRISTMAS.  It takes place in a futuristic Chicago, a mega-city that, in my mind, has that gritty feel to it that is unique to concrete jungles around the world.  And of course, Reina Vedette and Edison Wicke have definite accents—Reina came from New York, so in my mind she sounds like pure Brooklyn.  Edison is a native of Chicago’s future mean streets, so he’s rough around the edges and has that accent that the Gecko from Geico tries to nail.


Is HOW THE GLITCH SAVED CHRISTMAS going to sound the way I’ve been hearing it?  Honestly, I don’t expect that AT ALL.  What I do expect is to marvel over the fact that the words I painstakingly threaded together are going to become an audio book, a book anyone can download and listen to--and, I hope, enjoy.

I also expect something else.  I’m going to laugh my frigging ass off at the sex scenes.

And speaking of… One final excerpt from HOW THE GLITCH SAVED CHRISTMAS!

For a cocky, Grade-A specimen of magnificent manhood, Reina couldn’t help but be surprised at Edison’s flare of insecurity, even as it touched a soft spot she didn’t know she had. Never before had he taken her teasing to heart. It was almost as though he needed her to admit she wanted him. Needed him. Desired him with a force so profound it could change the course of her life.
It was almost as though what she felt mattered to him.
As she pushed him under the steaming spray and his ferocious gaze crashed and slashed into hers, Reina found it mattered to her as well. So much.
His breathing was shallow, disturbed. An echo of her own. Those cyberized ears of his had to be picking up on the thundering of her heart, because she could hear it, too. For two years she’d made herself ignore him when she could get away with it, compete with him when she had to, and prove herself to him whenever the opportunity arose. Because deep down, she’d wanted to impress him. Just as much as he impressed her.
Now it was time to impress him in a new way.
She didn’t speak as she slid her hands up to the exposed skin of his chest, then down to the juncture where the shirt remained fastened. For just a moment she tried slipping the button through the wet fabric, then looked up at him when the damn thing decided it wasn’t going to be cooperative.
“I promise I’ll buy you a new one,” she said simply, then yanked with all her might.
A groan escaped him when buttons flew everywhere, the skittering of them lost to the hiss of the water. He closed his eyes, his head falling back against the marbled wall in a lush surrender even as she drank him in first with her eyes, then with the helpless, needy hunger of her mouth. He couldn’t have been more stunning if he’d sprung fully formed from her deepest fantasies. His skin tone was several shades darker than her own three-days-dead paleness, and stretched tautly over a warrior’s frame that could have come from the era of gladiators. A light dusting of hair veed across his chest to arrow down his stomach, growing darker as it dipped under the waist of his pants in a trail that beckoned her to explore. And she would. But first…
With a sigh that was borne out of pure relief, she pressed her lips to where his chest shuddered with each earth-shaking beat of his heart. It was a dream come true to open her mouth against his skin and taste him, swirling her tongue to savor his clean flavor. One of his hands came up to plow through the heavy mess of her hair, pressing against the back of her head in silent encouragement to explore him to her heart’s content. His other hand pressed against the small of her back to grind her into the stiffened length of his staff, a gesture designed to both please himself and to show how her mere presence was enough to put him in such a helpless state.
It was a state she was only too happy to keep him in for the foreseeable future.
A delicious pulse between her legs began to throb even as she let her mouth wander up to the defined ridge of his collarbone. Her teeth were a gentle threat as she pushed the wet material of his shirt along with his coat off the solid expanse of his shoulders. When the sodden material caught at his elbows, he shook off the restrictive binds like he was shaking off shackles. His torso was a living sculpture, but so much more inviting as he shivered with eagerness beneath her hands, goose bumps breaking out wherever she touched despite the heat of the shower. Helpless to stop herself, Reina learned the texture of his hair-dusted skin, knowing that even if she looked the world over she would never find a man more perfectly suited to her own finicky tastes than Edison.

For a more detailed look at HOW THE GLITCH SAVED CHRISTMAS, as well as CRIME WAVE IN A CORSET and my other projects, please feel free to visit my Pinterest storyboards.