Seven Days And Counting Before A CLOCKWORK CHRISTMAS/CRIME WAVE IN A CORSET Releases! 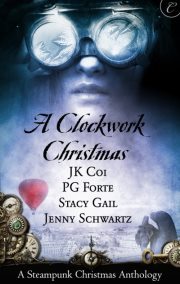 Yippee, I have my newly uncrashed laptop back from the Geek Squad (how I love thee and your awesome warranties ^_^).  That means I’m now ready to share a couple insights and one more excerpt from my Christmas novella, A CRIME WAVE IN A CORSET! (P.S., you might need this for TRR’s YES! Party) 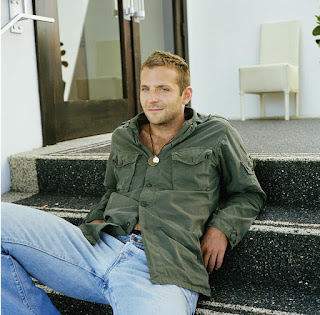 First off, I’m THRILLED that People Magazine’s Sexiest Man Alive 2011 is none other than Bradley Cooper.  Why?  Because my hero, Roderick Coddington, was fashioned after Bradley Cooper (do I have AWESOME taste when it comes to spotting a good man-morsel, or what?).  Those eyes, that tousled, golden brown hair, that elegant, rangy bod… Seriously, I have no idea where I was going with this, but who cares?  We’re talking about Bradley Cooper/Roderick Coddington.
Second thing… for several years I’ve had to push aside this insistent Christmassy-type idea about some sort of thieving anti-heroine who had to learn that giving—especially the gift of her closely guarded heart—was so much more satisfying than the taking that’s usually involved in a high-stakes heist (though if there was a heist involved as well, so much the better).  The problem was I couldn’t find the right background for it.  Then there was the submission call for a Steampunk Christmas from Carina Press.  Hello, perfect fit.   Heh. 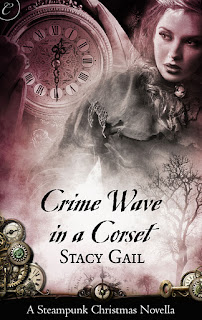 Now you’re interested, right?  Of course, right!  Take a gander at the blurb for CRIME WAVE IN A CORSET:
Roderick Coddington is on a mission to make Cornelia Peabody pay. After identifying her as the thief who stole a priceless Fabergé egg from his dying sister, he finds her and shackles a deadly timepiece to her arm. If she doesn't return the egg by Christmas morning, she will die.

Normally seven days is more than enough time for Cornelia to carry out the perfect crime, but Roderick's intrusion into her life is beyond distracting. He challenges her mind, and ignites her body with desire she's never felt before. But worst of all, he threatens the independence she values above all else...

As Roderick spends time with Cornelia, he realizes there's a lonely soul hidden beneath her beautiful but criminal veneer. Falling for a thief wasn't part of Roderick's plan, but plans can change and he has no intention of letting another priceless treasure get away from him.


And here’s one last little peek at CRIME WAVE IN A CORSET's official excerpt before it releases next Monday, December 5th! (And if you’re playing TRR’s game, your hint is in this excerpt!):

EXCERPT:
“What is it you wanted to show me?”
“This.” With a dark enthusiasm that unnerved her, he led the way to a workbench and turned on an overhead light. “It took me five months to perfect this prototype’s design. I finally had success when I read about Edison’s more stable bamboo filament in his latest electric bulb. Once I had that final piece to the puzzle I was able to create this beauty, as well as its twin now locked to your wrist. What do you think?”
Cornelia moved in for a closer look. It was a tiny clockwork, with an odd configuration of twin miniature pendulums on either side of the filament he had mentioned. Behind the swinging pendulums was a copper backing that seemed to glow with a strange bluish light. “What am I looking at?”
“It’s a type of battery that gets its charge from perpetual motion.”
“Perpetual motion is a myth. Rudolf Clausius’s laws of thermodynamics prove that categorically.”
He shot her a quick glance before he latched the clockwork around the dummy’s waist. “While it’s true that nothing stays in motion forever and does, in fact, need an outward impetus to keep going, the mere beat of your heart and the flow of blood through your veins is enough kinetic energy to keep your timepiece going for seven days, while at the same time accumulating an electrical charge within its battery casing. Where did you get your education?”
“I thought you claimed a guttersnipe like me didn’t have one. Whatever are you doing?”
“Demonstrating what will happen to you if you don’t agree to steal back what you took from me and mine.”
Her quick intake was audible, but she couldn’t help it. In a night full of surprises, that was a lulu. “You want me to steal something for you?”
“Steal something back,” he stressed, his tone so cold it would have made the North Pole seem balmy. “An egg, to be precise. A very special, very rare egg. Now do you remember?”
Of course she did. It wasn’t every day she came across a magnificent Fabergé egg with a surprise of a solid gold cherub hidden inside. It had been so heart-stoppingly beautiful she had almost kept it for herself.
He made a sound of impatience. “No need to answer, I can see you do. Which means we’re making progress.” With brisk efficiency he did something with the clockwork, then turned to pull her back. “Now that you know what I want, you need to understand what will happen to you if I don’t have the egg back by midnight, Christmas morning.”
Before she could ask what he meant, a sickening odor of ozone and smoke billowed out along with a harsh electric buzzing that made her eardrums quiver in protest. Right before her horrified eyes, the dressmaker’s dummy shuddered and jived while sparks flew in every direction. It toppled over even as it burst into flame before the buzzing slowly growled to a sullen end. Roderick was there in an instant with a pail of water, dousing it with motions both unsurprised and repetitive, and in the part of her brain that still worked Cornelia now grasped why the dummy was so scorched. Before locking his timepiece on her wrist, the ever-meticulous Roderick Coddington had tested his electrocution device over and over, just to make sure it worked. Just to make sure it could kill.
Just to make sure it could kill her.
“So there you have it.” Roderick turned to her with a vicious simile of a smile while smoke hung about them in a poisonous haze. “Tick-tock goes the clock, Peabody. You have seven days to right a terrible wrong. Or barring that, seven days to live. Either way I’ll be satisfied.”
I’m so excited this story is being told at last.  Christmas, love, and one tiny, little killer timepiece.  What’s not to love? ;)
Posted by Stacy Gail at 8:27 PM 3 comments:

ZERO FACTOR IS UP FOR BOOK OF THE WEEK! So, um... vote for me? Please? 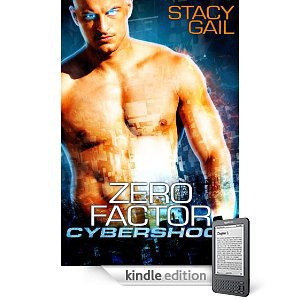 A truly spectacular email was waiting in my inbox from Long and Short Reviews (LASR) this week--a 4.5-star review for ZERO FACTOR!   (To check out this review from Orchid at LASR, please click here)

This novella is part of a three-story anthology called CYBERSHOCK, published by the ever-amazing Samhain Publishing.  The novellas have been separately released in ebook format, and will be published in print in July, 2012 (I'm so looking forward to that!).


But what's really fabulous about this review is that I now have an opportunity to win the Book of the Week on LASR's website.  It's an honor just to be nominated, so I'm thrilled with this already.  But I'd really like to win, so I need your vote!  Just click here and vote for ZERO FACTOR, and I'll give you a cookie.  Or at least a picture of a cookie.  Or maybe a donut.  Your choice.