When I was chosen to be in Carina Press’s sci-fi holiday anthology, A GALACTIC HOLIDAY, I had no idea I was joining a group of such talented (and wow, PROLIFIC!) writers.  First it was Sasha Summers with two book releases coming up in December, and now it’s my other sci-fi antho sister, AnnaHackett, delving into the oh-so sexy world of paranormal romance in her latest release, MIND RAIDER, book two of The Anomaly Trilogy!


Never hide, never cower and live by your own rules. 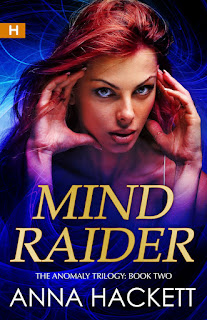 Life has taught mind raider Mara Ross to never let anyone break her. Especially not the crime lord who tortured her for her ability to control other people’s minds.  But now her former tormentor has kidnapped another woman and Mara will do anything to save her—including joining forces with a dark, powerful man who is more dangerous than anything Mara’s faced before.


The CIA’s experiments left Callahan with lethal powers he must control with every inch of his will.  As the leader of Haven, a sanctuary for anomalies, he stays focused and alone…until Mara blazes into his life. Cal knows he must keep his distance from the fiery mind raider because she threatens his control…and if his control breaks, people die.


On a mission deep in the wilds of Indonesia, desire explodes between Cal and Mara. But as the two wounded souls are drawn to each other, terrible secrets from Cal’s past threaten to drive them apart.


Want more? Of course you do!  Check out Anna’s excerpts on her Books page.  Or better yet, just jump right on in and pick up both TIME THIEF and MIND RAIDER, the first two books of Anna’s The Anomaly Trilogy (oodles of buy links below).  They're out now and just waiting to give you everything you wanted in your weekend reading.  Enjoy!


﻿
Wheee, my steampunk antho sister, Jenny Schwartz, has a new book release this week!  May I present… *drum roll* …COURTING TROUBLE, a fabulous steampunk tale from Down Under!


Many of you probably already know the steampunk genre, but I’ve noticed there are still a few people out there who’ve never actually heard the term before.  If you’ve read any H.G. Wells and Jules Verne, you’ve been introduced to the concept of what makes a story quintessentially steampunk.  If it’s a setting that takes the familiar Victorian-era time frame and twists it (asking the question of what the world would have been like if it had stuck with the power of steam rather than fossil fuels), it’s a steampunk.  If it has marvelous inventions, clever gadgets and fantastic modes of steam-powered transportation, it’s a steampunk.  If it's turn-of-last-century science fiction, it's steampunk.   And if it’s got a mind-boggling weapon of mass destruction, a feisty suffragette and her adventure-loving, protective beau, you’ve got COURTING TROUBLE, the second steampunk novella in Jenny's Bustlepunk Chronicles series, published by Carina Press!


Want to know more? Read on!

All suffragette Esme Smith wants is respect. Her beau, American inventor Jed Reeve, may be more enlightened than most men, but lately his need to protect her is at odds with her need for independence. Esme begins to wonder if a modern woman can share her life with a man without losing some of herself.

With his courtship of Esme stalled, the last thing Jed needs is the pressure of saving the Prince of Wales. But when blueprints for a sonic destroyer fall into his hands, he uncovers an anarchist plot that could have deadly consequences.

While investigating the threats, Jed is determined to keep Esme out of harm's way, despite her protests. But when the terrorists capture Jed and demand a priceless emerald in exchange for his life, it's Esme who must draw on all her strength to save the day.


I had the honor of beta-reading COURTING TROUBLE for Jenny, and I loved seeing Esme and Jed get tangled up in their latest adventure Down Under.  What’s more, Jenny brings more of her patented lyrical prose in describing her beautiful country of Australia.  She has such a gift with description; when you read a Jenny Schwartz novel, you forget you’re reading.  Instead, you become so immersed within the story, it's as though you're there right along with her wonderfully charming characters.  How awesome is that? :)

Congratulations on your latest release, Jenny, and thank you so much for allowing me to get a sneak peek at COURTING TROUBLE.  And for those of you who'd like to get your hands on the latest from The Bustlepunk Chronicles, check out the links below. Happy reading!