Excerpt from WOUNDED ANGEL, Plus A Glimpse of DANGEROUS ANGEL 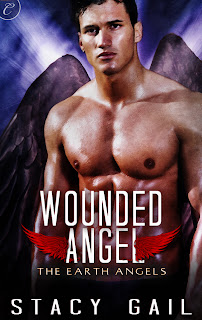 I’ve been bouncing in excitement over the release of WOUNDED ANGEL, while at the same time slaving away over edits for DANGEROUS ANGEL, the final book in The Earth Angels series.  Maybe it’s because of this that I’ve decided to show off a little bit of both books today.  Enjoy!


“It’s really not that big a deal.” But he limped in a pitiable way as he moved to the table. Hopping up wasn’t required. All he had to do was settle back onto it like it was no more than a barstool. “There’s no need to go to so much fuss, you know. You didn’t kick me that hard.”


He blinked as she dug into the cart and came up with gloves for herself and a rolled-up, self-adhering elastic bandage for him. So much for trying to ease her conscience. “Excuse me?”


“I thought you said for me to give it my all or you’d kick my butt out of class.”


“All I wanted from you was a demonstration of a hold like a bear hug.” She turned to him as she removed the bandage from its package. “I believe my exact words were for you to put your arms around me. Not once did I say, ‘Toss me up into the air as if I’m a three year old.’”


“I didn’t want to do it in the first place, so I wasn’t exactly hanging on your every word.” And he hadn’t wanted to do it. Making like a nightmare that might lurk in this woman’s past rated on his Things To Do list just below setting his hair on fire.


Her huffy sigh carried a world of straining patience. “For purposes of teaching the basics of how to deal with an attack from behind, I needed a partner to act out the part, step-by-step. When you decided to improvise and show off how muscly you are with that hard body of yours, I hit the fast-forward button on the defensive moves and reacted instinctively. The result—no one really learned anything while I get to wrap up your knee like a mummy.”


Nate watched as she bent, caught his foot up, and wedged it between her knees. He froze while his imagination went wild as he stared at where they came into physical contact. With one move off the exam table, he could easily slide his leg between hers. He’d do it slowly, not to scare her but to entice her, and he’d enjoy the friction of it as his thigh parted hers, the slender columns of her legs sandwiching his in a warm embrace of need and hunger. He’d run his hands down her back to cup her lean little ass to encourage her to ride along the length of his leg. He wouldn’t stop as the warmth of the friction-created heat bloomed at the juncture of her thighs, and she would rock against him until that heat became an all-out blaze and she was moaning for more…


His skin flushed and tightened until he was the one who wanted to moan with the sweet pain of it. “You think I’ve got a hard body?”


The next little tidbit I’d like to share today comes from the project I’m editing now, so fair warning—it might not appear exactly like this in the final manuscript.  Here’s a small snippet between the heroine, Nikita Tesoro and a character introduced in WOUNDED ANGEL, Kyle (the hero in DANGEROUS ANGEL).

To set it up this scene… Kyle and Nikita, rival bounty hunters, have known each other for years and had been striking sparks off each other every step of the way.  Set in Miami, Kyle has dropped in unannounced while Nikita's topless-sunbathing on the roof of her RV, and it's made her, shall we say, a tad grumpy…


Any pissed-off cat would have been proud of the hiss Nikita unleashed. “Why would I be asleep at this time of day? It’s almost noon.”
“Don’t you believe in naps? Wow, I don’t know if we can be friends if you don’t believe in naps. What are your thoughts on naps, now that we’re on the subject?”
She dragged a hand through the wild tangle of her ocean-salted, now-dry hair. When Kyle was in this bouncy-playful kind of mood, he was too delicious to be resisted. Her only defense against losing control over the situation could be just one thing—death threats. “Don’t make me come down there and kill you, cabron.”
“Did you know that with your hair flowing all over the place like that, you sort of look like my idea of a Cuban Rapunzel?”
ADHD, thy name is Kyle. “You know I don’t like to be disturbed. Remember that one night when you knocked on my window to bug me about catching that slimy wife-beating jump? Remember how I tased you for your efforts?”
“Yeah, that was a lovely little jolt of electricity you gifted me with. Made me so tingly I felt like I was walking on air. Or maybe that was just seeing you in a nightie.”
“I don’t wear nighties, I wear big T-shirts to bed.” Or nothing at all, but no way in hell was she going to let him know that.
“Are you sure?” His brows drew together doubtfully. “I distinctly remember a nightie with lots of frills and lace. You looked great in it, by the way.”
Oh, my God. “The way your brain works is one of the great mysteries of life.”
“Thank you.”
“It wasn’t a compliment."


I’ve been so excited about WOUNDED ANGEL, because the hints that have shown up in the first two books of The Earth Angels, NOBODY’S ANGEL and SAVAGE ANGEL, all come together in the third book.  At last, the enemy is unmasked, a path is set, and the strength of love is tested.  Want to know more?  Here’s the blurb and link to the opening scene!

Book three of The Earth Angels

A descendant of the Angel of Vengeance, Nate da Luca was gifted with an uncanny ability to find things. It made his job as a detective a breeze--until he learned the hard way that some things should remain hidden. After that, his powers vanished, along with his belief in himself. Which is going to make tracking down Gabriella Littlefield for his latest client a challenge.

Personal trainer Ella Little paid a hefty price for her life--now all she wants is to live it in peace. Then a sexy hulk of a man turns up in her gym, reigniting desires she thought she'd left behind along with her real name and hair color.

Desires she can't deny even after she discovers Nate's no stranger to her dark past.

Before he can convince her the attraction is mutual, Nate's going to have to earn Ella's trust. But a demon is playing for keeps in the world of humans, using Ella as bait, and the last thing they have is time...

Go back to the beginning with Nobody's Angel, available now!

The early reviews are looking pretty nifty too!  From Beth at TomeTender:


“Stacy Gail writes a fantastic paranormal tale where demons and evil live and hunted angelic descendants fight for survival and those in need. “ 4 Stars (Source: Goodreads)


From Liz at Harelquin Junkie:


“Seriously, Stacy Gail is about to be put on my favorite authors list! I've REALLY enjoyed the Earth Angels series” 4 stars (Source: Goodreads)


“So, what to say about this book? Well, for one... I LOVED IT! Honestly, these books just get better and better! They are so well written and captivating.” 5 stars (Source: Goodreads)


From Reading The Paranormal:


“I have to admit that I think this is my favorite in the series to date. Nate and Ella are both wonderfully damaged and yet they've managed to overcome things that would cripple others. Big things, guys. BIG THINGS.” 5 stars (Source: Goodreads)

If you’re curious, please feel free to look through its storyboard on Pinterest.  Enjoy!