Man, 2013 was amazing!  Bang out of the gate in January, I celebrated the release of NOBODY’S ANGEL, the first book in the four-part Earth Angels PNR miniseries.  Two weeks later, in the first week in February, the second book, SAVAGE ANGEL, released.  I had three whole months to breathe—and work on other projects, heh—and then WOUNDED ANGEL was out.

During that mini-break between book releases, I went to my first convention, RT!  Oh, goodness.  Talk about sensory overload.  I met fellow shell-shocked newbies like Gretchen Galway and Heather Manning (only sixteen when I met Heather, and she became published by Astraea Press!).  I was able to reconnect with PG Forte and some of the other Nine Naughty Novelists (man, do they know how to karaoke!  :D). While I was at the ebook signing event I met (and openly tackle-hugged) Sasha of Caribbean Accent Book Reviews, Steph of Book-A-Holic Anon,  Jessie Potts of absolutely everything, and Joy of Joyfully Reviewed (no mistaking those cute bunny ears!). Luckily my hyper personality didn’t frighten any of these booklovers, who’ve got such a great way with words themselves that their various blogs are adored by fans the world over.

It must be the Year Of The Brainiac Teens, because I was lucky enough to come across Brooklynn, aka Celestial Reviews. When I first met Brooklynn through Goodreads, I assumed she was a product of some Ivy-league post-grad school--that's just how her emails struck me.  Confident and polished, Brooklynn has the same passion for words (and PNR!) that I do, and I'm certain that whatever she decides to do--like, conquer the universe--she's going to succeed (and do it with style).

Thanks to Twitter, I’ve also “met” some incredibly talented people this year.  Kelly Rubidoux is behind Reading the Paranormal book blog, and is someone I wish I lived next door to.  Why? Because all I want to do is hang out in the presence of her dirty-minded awesomeness.  She’s also Kelly Apple, a brilliant indie PNR author who knows how to weave a mesmerizing story.  Since she’s been a blogger for years and is the most avid reader I know (srsly, she reads ANYTHING, even the oh so hawt dino-erotica *laughs*), she knows what works in a story.  I have a suspicion 2014 is going to be a big year for Kelly, and trust me, it’ll be well-deserved. 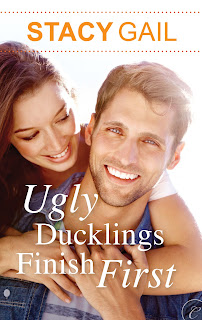 In August, I kicked off a contemporary romance series, called Bitterthorn, Texas.  This series is open-ended and something I’ve been working on for years.  The first book in this series was UGLY DUCKLINGS FINISH FIRST, a high school reunion/friends-to-lovers story and a return to my contemporary romance roots.

The second book in the Bitterthorn, Texas series just released and has wound up on not one, but TWO “Best Of 2013” lists.  STARTING FROM SCRATCH, a military homecoming Christmas romance novella, was one of Blogging by Liza’s favorites, with the review here.  The other “Best of 2013” list was from Dear Author’s Jayne, whose review can be found here.  STARTING FROM SCRATCH was a “Recommended Read” from Dear Author, and from Harlequin Junkie as well, placing that coveted “HJ Recommends” banner over the cover. 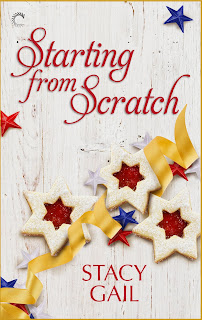 So, if you were counting, that’s a grand total of five books released this year!  As for what’s coming up, The Earth Angels miniseries will conclude with the March 31st, 2014 release of DANGEROUS ANGEL (it made my editor cry—yay!).

Also, Chandler’s story will make history—literally—in Bitterthorn, Texas, so it’s pretty much a guarantee that this small town will never be the same again.  Originally titled SECRETS SO DEEP, I’ve been told by my editor that we’re undergoing a title change.  Watch this space for the new title and release date. ;)

The project I’m currently working on revolves around a secondary character found in STARTING FROM SCRATCH, Coe.  In SfS, Lucy reminds Coe that plans made when people are young are often the kind that don't pan out.  Suffice it to say, Coe is the epitome of this statement.  But if he can get out of his own way, this tarnished knight might have a second chance at happiness with his princess.  Maybe.

Last thing… I have a four-part contemporary romance miniseries that is just sitting around gathering dust.  After much debate, I’ve decided to self-publish the Safe Harbor House miniseries to plug up the downtime in between my Carina Press releases! I can hardly believe I'm going to voluntarily run myself through the gauntlet of technical hoops that have to be jumped when it comes to self-publishing, and I’m definitely scared.  And excited.  And scared some more.  But nothing ventured, nothing gained, right?  At the very least, 2014 won't be boring. :)

Got any plans for your 2014?  What do you see when you look down the road?

Care For a Sneak Peek at DANGEROUS ANGEL?

Hey there!  I just received the BCC (back cover copy) for DANGEROUS ANGEL, coming to you from Carina Press.  Wanna see?

Miami’s best bounty hunter, Nikita Tesoro will do anything to collar a fugitive. Including stepping into a stripper’s stilettos for the night. Outsmarting her rival Kyle Beaudecker is just a bonus. Despite the sexual tension sparking between them, Nikita keeps a professional distance from “Hurricane” Kyle. After all, she can’t get hurt if she doesn’t care.

A descendant of the archangel Barakiel with the power to harness electricity, Kyle should be focusing his energy on tracking down a demon that may be hiding in the human realm. But he’s a lover, not a fighter, and he’d much rather use his special talents for pleasure: specifically Nikita’s. And teaming up to find a bail jumper means spending lots of time together…

But when their case takes a turn for the demonic, Kyle can no longer hide his true nature from Nikita. He’ll do whatever it takes to win her heart—even stop the apocalypse. But he can’t do it alone.


Yeah, I know I just had a release in my Bitterthorn, Texas series (*ahem* STARTING FROM SCRATCH, dontcha know :P), but I'm already getting excited about the conclusion of The Earth Angels miniseries.  DANGEROUS ANGEL will release March 31st, 2014, which is only a few months away, if you think about it.  I can't wait to reveal how this four-part story arc finally concludes!

For more on DANGEROUS ANGEL, please feel free to check out my Pinterest storyboards. :)