So, Summer Is For Relaxing, Right?


Every June, I look forward to BuNoWriMo, a month-long frenzy of writing a 50K- word novel in 30 days.  But for the past two years I’ve had it interrupted—in a good way, though, so I’m not complaining!  Last year I’d gotten about a third of the way into a superhero novella entitled NOBODY’S ANGEL, when I got hit with various things, like the art form info sheet for CRIME WAVE IN A CORSET, which was to be release during the Christmas holiday season.  As soon as I sweated bullets over the required elevator pitch (OHMYGODITWASSOOOOHARD!!!!), I then got hit with the three phases of editing—developmental edits, line edits and the copy editor’s edits.  By the time CWiaC was done to everyone’s satisfaction, June was over, and I eventually finished my BuNo project at the end of July.


The great thing about this is… I FINISHED.  In my family it’s always been a matter of finishing what you started.  And there are rewards for the determination that goes hand-in-hand with hard labor—NOBODY’S ANGEL was picked up by CarinaPress and will be published in January of 2013.

This year I started BuNoWriMo with pretty much a clean slate.  Nothing was going to hold me back.  I would DEFINITELY be able to finish a project in thirty days this time around!  Then I got SLAMMED with not just one art form sheet, but TWO.  NOBODY’S ANGEL and HOW THE GLITCH SAVED CHRISTMAS (my Sci-Fi holiday novella in Carina Press’s A GALACTIC HOLIDAY Anthology, releasing December 3, 2012).


Then came the edits.  All the edits for both NOBODY’S ANGEL and the second book in the series, SAVAGE ANGEL (releasing in February, 2013 by Carina Press) landed in my inbox during the month of June.  Once again I set my BuNo project aside and focused on the job at hand, which was to polish up the projects already under contract.  As June trickled into July, I waved my dream of finishing a book in thirty days a fond farewell.


This past Friday I sent off the copy edits for SAVAGE ANGEL, and last night I completed my BuNo project entitled WOUNDED ANGEL (yeah, it’s a series ;) ).  Only twenty-two days late, but that’s no biggie, right?  Now, to set my sights on finishing up the Earth Angels series by writing a book in the month of August…

It might be sweltering here in the Northern Hemisphere, but down in the southern half of the globe it’s the middle of winter.  To celebrate, my Aussie antho sister, Jenny Schwartz, is giving away a rare print copy of our steampunk Christmas romance anthology, A CLOCKWORK CHRISTMAS here on her website!  These four tales are full of ingenious steampunk gadgetry, magnificent Victorian flair and the moving, twine-around-your-heart emotions that come with falling in love.  To enter, pop on over to her blog and leave a comment with your email addy.  And if you’d like to learn more about A CLOCKWORK CHRISTMAS and its stories written by Jenny, JK Coi, PG Forte and me, check us out here.  Good luck! 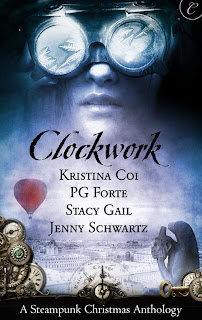