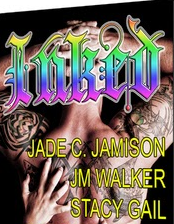 I’m freaking out in all the good ways, can you tell? :D My first foray into self-pubbing is now officially live on Amazon! *happy dance*

Sebastian Payne is the power behind House Of Payne—a self-made millionaire, international celebrity and a leading force in the world of tattoos. Payne could have any woman in the world, but he’s got eyes only for 3D artist Becks Delgado, and he’ll do anything to get her. When he takes her out for a little private dining at an exclusive restaurant I fashioned after The Metropolitan Club in the Willis (Sears) Tower in Chicago, he introduces his lady-love to his version of fine dining…

Sound interesting? Find HOUSE OF PAYNE in the INKED anthology, along with Jade C. Jamison’s PUNCTURED, BRUISED, AND BARELY TATTOOED,  and J.M. Walker’s SHATTERED STRINGS. All proceeds go to charity!

Blurb for HOUSE OF PAYNE:

Sebestian Payne took the concept of a tattoo parlor and transformed it into a sophisticated gallery of living art. The House Of Payne now caters to the rich and infamous, has garnered a worldwide following, and is run by Sebastian with an iron fist. He knows Becks is exactly what The House Of Payne needs, but there’s a problem. The accident that changed her life left its mark on him as well, and whether he likes it or not, it’s time to put his House in order.